Various tax issues should be taken into consideration when devising tax policy, including measures to incentivize companies to list:

1. Tax Incentive Measures: these are reductions and exemptions of taxes for companies that list on the stock exchange. There are various ways to create tax incentives. It will be very important to consider how the incentives will relate to the existing rules for tax holidays on promoted investments;

2. Clarification and Amendment of Certain Existing Tax Rules: In the current tax laws and regulations, there may be a number of tax rules which pose problems or are difficult to interpret in case a company is listed. In order not to pose an obstacle, such rules should be clarified or amended for that situation;

3. Taxation of Securities Transactions: As is the case in most countries, it may be considered to apply a (low) tax on investors that buy and sell securities on the stock exchange. The revenue may be used to cover the operation of the financial system, or simply for the general treasury; and

4. Rectifying Past Underpaid Taxes: When a company lists on a stock exchange, it will generally be subject to a tax due diligence first, an examination whether that company has any underpaid taxes in past years. If so, that must first be rectified. The policy maker could consider making this process easier or more affordable for companies that want to list.

In this contribution we cite some observations with respect to each of these issues.

Contrary to popular belief, research shows that in general tax incentives are not often very effective in attracting foreign direct investment (FDI). A 2002 OECD study revealed that although tax issues will always be taken into account by investors, these are rarely among the most important factors when an investment decision is made [1].

The same and other research shows that predictable, clear tax rules and a transparent tax administration by the authorities is more influential on the decision of foreign investors than low tax rates [2].

Sometimes developing countries want to compensate with low tax rates for a country’s lack of fundamental production factors such as skilled labor, infrastructure or commodities. However, studies show that in most cases that gap is too wide anyway [3].

The primary purpose of becoming a listed company is of course to attract capital and shareholders. This objective is likely to outweigh the benefit of any tax incentives in the first place. In other words, it is unlikely that companies will primarily list at the CSX to enjoy tax incentives. In that sense, for example, a complete tax exemption for listed companies is likely not necessary and would constitute in the first place a windfall profit for shareholders.

What happens with the tax collection from listed companies?

The reason is almost certainly because of the increased corporate governance. Listed companies are usually subject to more scrutiny on their operations, and external audits. Shareholders of unlisted companies may extract profit from the company in various ways, but that is much more difficult for listed companies.

Which countries have tax incentives for listed companies?

A number of countries have created actual tax incentives in the taxation of the listed company itself.

– Vietnam applied in 2004-2006 a 50% reduction on the normal Corporate Income Tax (CIT) rate (at that time 28%). The effective tax rate of a listed company was thus 14%. This scheme was introduced when the Stock Exchange was setup, but not continued. In case a listed company also had a reduced tax rate or tax holiday because of its investment project, the 50% reduction would only apply after the other tax holiday;

– Thailand currently applies a lower CIT rate for companies that are listed on Thailand’s SET (25%) or the MAI (20%). The normal Thai CIT rate is 30%, but lower rates exist for profits below a certain threshold. The reduced rates for the listed companies applies only for a period of 3 years, not beyond.

– In addition, Thailand provides in an investment tax credit up to 25% of the total qualifying cost of new projects of listed companies (machinery, vehicles, equipment and software).

In the current Cambodian tax laws and regulations, there are a number of tax rules which pose problems or are difficult to interpret in case a company is listed on the CSX. In order not to pose an obstacle, such rules should be clarified or amended for that situation. As international studies show, clear and coherent tax rules are more persuasive than foreign investors in Asia than temporary low rates [4].

The following tax rules are examples of this. Further study to identify possible obstacles in existing Cambodian tax rules must be made.

Is a company’s loss carry forward cancelled in case of change in shareholders?

The Prakas on the Tax on Profit [5] sets out a number of conditions for companies to be allowed to carry forward their tax losses. One of those conditions relates to the “identity of the enterprise”

b. Identity of the enterprise:

b1 A loss is allowed to be brought forward for deduction from the realized results of one same enterprise only. In this: – In the case where there is a change of owner, the loss sustained by the former owner cannot be brought forward for deduction against the profit of the new owner. The change of owner occurs mostly through the sale of the enterprise, the death of the owner and the business is taken over by the deceased’s heirs, …

This provision does not fit very well with the concept of a shareholding company. It is unclear from section 9.5. Prakas TOP whether a change in shareholders of a company would be deemed a “change of owner”. If it is, the company would no longer be allowed to offset its carried forward loss with new taxable income. This is a significant disadvantage for the company, and leads to the double taxation of business income.

Obviously, a company that has part of its shares publically traded may have changes in shareholders all the time.

It is recommended to clarify the Prakas TOP so that transfers of securities are not deemed a change of owner which may lead to cancelling of the loss carried forward.

Which taxes apply to a buy-back of shares?

Listed companies often purchase some quantity of their own shares. They may hold the shares for a limited period of time or cancel the shares in certain circumstances.

Cambodia’s tax rules are unclear as to which taxes apply to this relatively common operation. There is a 14% withholding tax on dividends paid to foreign residents (see below) but the definition of dividend does not include a premium paid by the company that redeems its own shares. As a result, it is unclear if taxpayers can buy-back shares without any taxes.

What is the difference between resident and non-resident shareholders?

a) The first criteria is determined by a physical person’s residence. A physical person has his residence located or situated in the Kingdom of Cambodia if he owns, rents, leases, or has available for use a house, apartment, dormitory, etc. in which he usually stays or occupies;

Although this definition is quite clear, it may be difficult to apply in practice without some further measure of tax administration. For example, the company paying the dividend must be certain that the shareholder is a non-resident or a resident. Under the current rules that remains a matter of interpretation and appreciation of the facts. In hindsight, tax authorities may disagree with the company that a certain shareholder is a non-resident, and claim the withholding tax that the company did not withhold.

It is recommended to put in place administrative measures to clarify the residence of individual shareholders.

Taxation of capital gains on shares listed on the CSX

In my view, under the currents status of Cambodian tax law a non-resident that realizes a capital gain on shares in a Cambodian company is not subject to tax. This can be concluded from the combined interpretation of Art. 26, Art 33 and Art 107 Law on Taxation, particularly since Art. 7 Law on Taxation has introduced a capital gains tax that is for the moment not implemented. However, this view has not been officially confirmed by the General Department of Taxation. Thus, there is some uncertainty in this matter although in practice it is clear that no such taxes are claimed or declared.

For non-resident investors in the SEC it is crucial to determine the net-profit that they can derive from investing in listed shares. Thus, it must be clear which Cambodian taxes will apply to the purchase and resale of shares.

It is recommended that the capital gains issue is clarified. 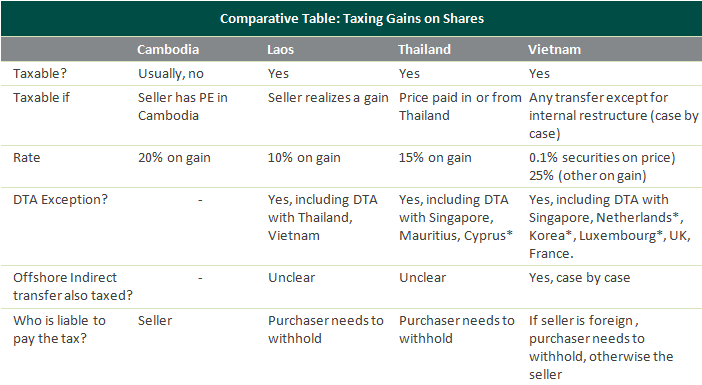 As is the case in most countries, it may be considered to apply a (low) tax on investors that buy and sell securities on the SEC. The revenue may be used to cover the operation of the financial system, or simply for the general treasury.

The different taxes and rates applied in the region are represented below:

When a company lists on the SEC, it will generally be subject to a tax due diligence first, an examination whether that company has any underpaid taxes in past years. If so, that must first be rectified. The SECC could consider making this process easier or more affordable for companies that want to list.

Currently, penalties and interests for late payments in Cambodia are set by law. Art. 125-136 Law on Taxation provides in three levels of administrative penalty (10%, 25% and 40%), criminal sanctions and other measures. In addition, a 2% interest per month for late payment is imposed.

On the other hand, “forgiving” existing tax debt may be detrimental to fiscal revenue in the future. It rewards taxpayers for not complying with the tax laws in the first place. This may not be a good signal to send.

It is recommended to find a balanced approach in this regard.

The Actual Tax Incentives at CSX

The incentives are spelled out in a Sub-Decree from the Ministry of Economy and Finance dated on 22 April 2011, which is immediately in effect.

The MEF has not only taken into account the taxes of the listed company itself, but also paid attention to the shareholders and lenders of the company. 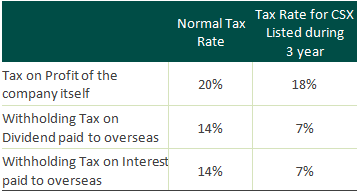 Companies that already have reduced tax rates, so-called Qualified Investment Projects (QIP) can still receive the extra CSX tax reductions. For them, the 3 year reduced Tax on Profit period will simply only commence after their tax holiday has ended. QIPs can benefit immediately from the withholding tax reductions, though.

The CSX tax incentives are not automatic. The companies and/or investors must apply to the General Department of Taxation for approval through the SECC. Investors must be registered with the SECC in order to qualify for the tax benefits.

The Sub-Decree also specifies that listed companies must submit audited financial statements to the GDT with their Annual Tax Return by 31 March of each year.

[3]OECD Report 2002, p. 81 “Tax incentives may enhance the attractiveness of a potential host country, but in many cases the relief provided will be insufficient to offset additional costs incurred when investing there”. Holland and Vann are of the same opinion: “Tax incentives on their own cannot overcome these negative factors” (ibid, ft.132, p. 987).