Instruction 18410 – dated 3 November 2016 (Instruction 18410) was issued by the General Department of Taxation (GDT) to provide guidance on the implementation on the withholding tax (WHT) obligations of the film industry and for real estate entities that operate in Cambodia.

Instruction 18410 provides an exemption with respect to the 15% WHT that would normally apply on royalties that are paid by local cinemas or agents in Cambodia to a Cambodian film production entity with respect to the right to show a movie that has been produced by the latter.

The exemption on the 15% WHT on royalties is in effect until 2018 and to qualify for the exemption the Cambodian film production entity must;

The obligation for Cambodian cinemas and agents to withhold WHT on royalties still applies however with respect to movies that are licensed from overseas film producers. For example – a tax registered cinema in Cambodia will still be required to withhold WHT at the rate of 14% on royalty payments made to a Hong Kong film company for the rights to show their movie in Cambodia.

However if the cinema in Cambodia subsequently re-distributes their rights to another agent in Cambodia no further WHT will apply as the cinema is not the owner of the underlying intellectual property i.e. the movie.

Effectively what this means in the event that immovable property is leased and subsequently subleased among two or more tax registered entities the 10% WHT is only paid one time on the rental payment made by the real estate company to the owner of the immovable property.

Notification 18410 brings into play a number of issues particularly with respect to the WHT implications for real estate companies. Firstly what is meant by a “real estate company”? Cambodia has licensing requirements for housing development companies from the Ministry of Economy and Finance but it would seem that what the GDT means by real estate companies are those entities that carry out real estate activities such as buying/selling and leasing immovable property.

While leasing or sub-leasing immovable property due to the lack of requirement on a specific license may be only one of many business activities carried out by a company in Cambodia it would appear that those entities can also benefit from the exemption provided for under Instruction 18410.

The current tax regulations relating to WHT obligations on leasing activities has often drawn criticism from both taxpayers and commentators due in-part to a misunderstanding of the underlying tax regulations in Cambodia and also in-part to the lack of guidance from the GDT with respect to its implementation.

In its 2016 Tax White Book that was submitted to the Director of the GDT, the European Chamber of Commerce in Cambodia raised the concern that when a registered taxpayer in Cambodia leases an office from a tax registered landlord the tenant will be subjected to two taxes – namely 10% VAT as invoiced by the landlord, and a 10% WHT requirement which the tenant is required to withhold declare and pay to the GDT.

On the surface it would appear that the tenant is being taxed twice however if the lease agreement was structured correctly that would not be the case. That is not say however that the current system is without its flaws and why the introduction of Instruction 18410 may lead to some re-structuring as to how commercial leases are put in place.

The typical issues that arise with leases and WHT are as follows:

Which party has the liability to bear the cost of the 10% WHT?

Under the tax regulations in Cambodia a lessee who is registered for tax is required to act as the Withholding Agent and withhold the 10% WHT from the rental payment and pay it to the GDT on behalf of the lessor.

In principal the WHT cost should be borne by the lessor – the role of the lessee being merely to withhold and pay the tax to the GDT on behalf of the lessor. Even the term itself “withholding” implies that the amount that is withheld by the lessee should come out of the rental amount before it is paid to the Lessor. However it is the underlying lease agreement between the two parties that determines which party, the lessor or the lessee, actually bears the cost of the 10% WHT.

The only small consolation for the lessee in this scenario is that when calculating their WHT liability they can do so on a net basis – rather than having to gross-up the lease amount and pay a slightly higher WHT amount.

However, if a registered taxpayer receives a valid VAT invoice from a lessor for lease payments the registered taxpayer is still required to withhold 10% WHT. There appears to be a dis-connect between the logic behind awarding an exemption for services – as outlined above – whilst still requiring WHT to apply on lease payments that are supported by a valid VAT invoice.

Now, under Instruction 18410, the WHT exemption also applies (at least up to 2018) on royalty payments made to resident film production entities leaving lease payments as the sole remaining class of WHT payment that requires WHT to still be withheld even when the transaction is supported by a valid VAT invoice.

In addition it should be noted that the lessee can claim a VAT input credit on VAT that is paid on lease payments made to a tax registered landlord and with respect to calculating the 10% WHT the tax base is the lease payment exclusive of VAT.

In the event that there is a lease agreement in place between two registered taxpayers and the agreement stipulates that the lessor bears the cost of the WHT i.e. the lease amount is reflected as inclusive of WHT in the agreement, then by law the lessor can claim a WHT credit which they can use to offset against their annual tax liabilities.

Whilst it sounds simply in theory there are of course issues that arise with respect to this mechanism. If the lessor is in a tax loss situation or has no tax to pay then the WHT credit may have to be carried forward for a number of years before it can be utilised.

Secondly, during the course of a tax audit the tax auditor may ask the lessor to provide proof that the WHT credit that they have claimed has actually been paid on its behalf by the lessee. This then requires the lessor to request copies of the monthly WHT tax returns from the lessee evidencing that the WHT has been paid. If the lessee does not want to co-operate then this may cause delays and in the worse-case may lead to a tax re-assessment by the auditors if they disallow the WHT credit claimed by the lessor.

In the future if the GDT insists on maintaining the WHT regime we suggest it would be beneficial if they print out statements to taxpayers that may request which detail the WHT payments that have been made on their behalf during the year. As the GDT is moving into an electronic database system this should not be a difficult change to implement.

In the first scenario the owner of the building will have to deal with the 10% WHT issues as outlined above with respect to all of its tenants that are registered for tax – this is illustrated as (1) in the diagram below. However if the owner of the building leases the building to a property management company (lessee) who then sub-leases to the tenants then the WHT implications will only be imposed on the first lease arrangement i.e. between the owner and the property management company. The payments made under the sub-lease will be exempted from the 10% WHT – see (2) in the diagram below. 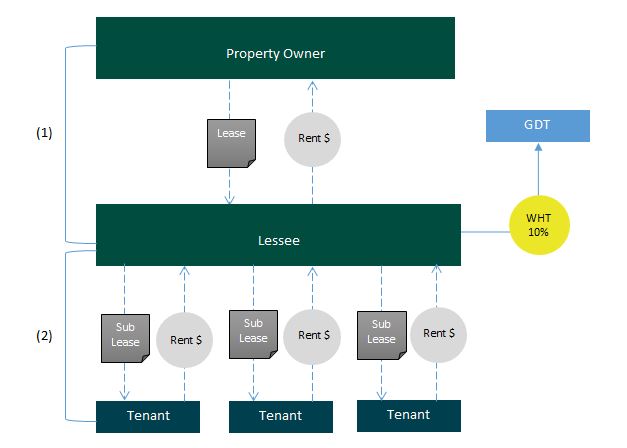 In practice the property management company (lessee) will be able to advise the tenants in the building that they are not required to withhold 10% WHT. This may come as a relief for many for many operators of commercial buildings/commercial land and special economic zones when dealing with the issues of WHT with their tenants as outlined above and may possibly lead to some re-structuring of existing commercial operations.

The information provided in this email is for information purposes only, and is not intended to constitute legal advice. Legal advice should be obtained from qualified legal counsel for all specific situations.